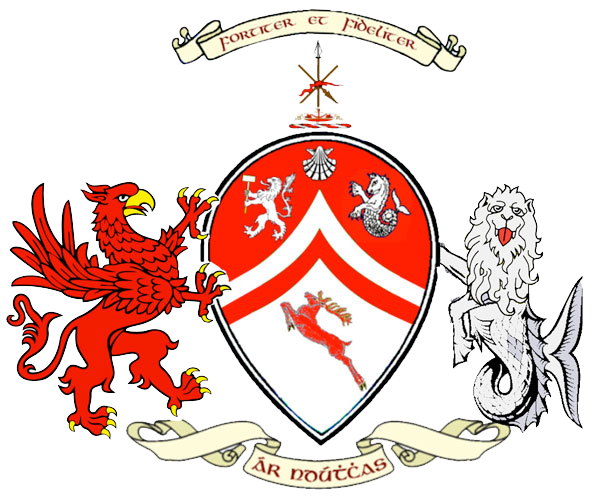 Blazon: Arms: Per chevron Gules and Argent a chevron counterchanged, in chief a cockleshell Argent between a lion rampant dexter bearing a hammer Argent, and a sea-horse sinister all Argent, in base, an Irish red stag salient Gules. Crest: Upon a torse Gules and Argent issuant from a Roman naval crown Argent a spear broken into three pieces two in saltire and the head in pale Proper banded Gules. Mottos: The principal (Cassidy) is Fortiter et Fideliter (Latin: Strongly and Faithfully) to be carried on an Escroll above the Crest and the secondary (Daugherty) is Ar nDuthchas (Irish: Our Heritage) to be carried on an Escroll below the Shield. Supporters (when allowed): Gryphon rampant Gules dexter and a Sea-lion rampant guardant Argent sinister.

ID: 1000355 – These arms were originally registered with the United States Heraldic Register in the name of my father, Commander John Vincent Cassidy, SC USN (deceased) as follows: This certifies that the heraldic arms of John Vincent Cassidy (1915-1967) which are offered in memoriam and conveyed to his descendants are registered as an original design and are described by the blazon below. Registration number 20150118B. – The arms were later registered in my own name with the International Heraldic Registry: This certifies that the heraldic blazon of Michael Joseph CASSIDY of Gulfport, Mississippi, USA [my birthplace, not my residence] born on the 29th of January, 1943 to John Vincent CASSIDY and Margaret Veronica CASSIDY nee DAUGHERTY are registered to the said sir as follows and may be conveyed to his descendants in accordance with Canadian cadency. # US 2013C1943. – The arms are also registered with the Italian Stemmario Italiano. – These arms incorporate the tinctures of the traditional O Caiside sept arms from Ireland as well as the tinctures of Alsace, both Gules and Argent. The charges represent our ancestors on both sides: Cassidy (lion), Daugherty (stag), Radigan (sea-horse), Schmitt (hammer), Johannes (cockleshell); the final two are from the Alsace region, while all others are from Ireland. In accordance with the French burgher arms tradition, no helm is shown; but the original Irish crest is retained. The Italian kite shield is preferred, representing our family’s sojourn in Italy for several years. – Special Note From Michael Richards, King of Arms @ assumearms.com: This is an excellent example of arms being handed down with proper cadency and documention. It is also a good example of how to blazon to accomodate the various traditions of International Heraldry if you plan on registering your arms in different countries.