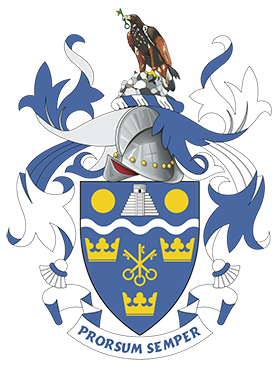 Blazon: Azure, a barrulet wavy enhanced Argent, between in base three coronets bottony placed two and one and at honour point a set of three keys, two in saltire and one in pale all Or, and in chief between two bezants a Mexican step-pyramid proper. Crest: Statant upon a rocky ground a Mexican eagle proper, in its beak a key upwards in bend Vert, the ward to dexter Or. The Motto: Prorsum Semper (Latin: Ever Forward) to be carried on an escroll beneath the Shield.