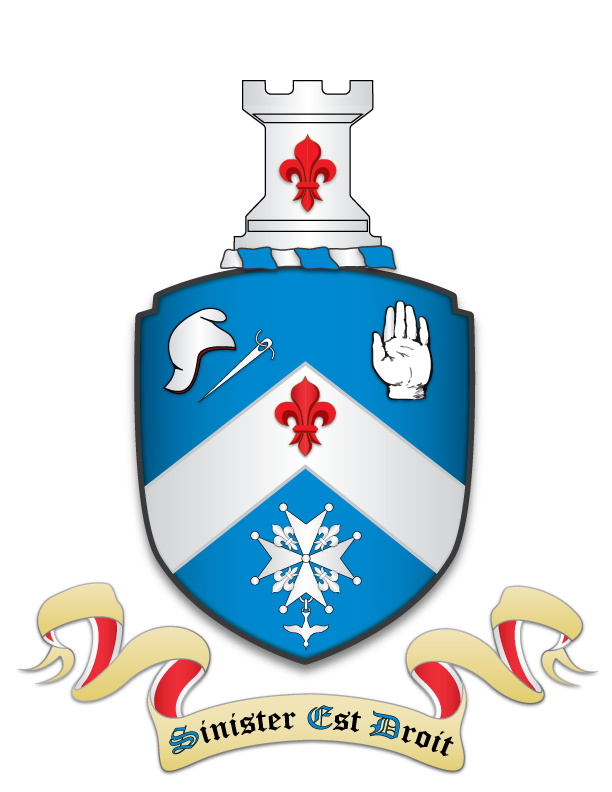 Blazon: Azure, on a Chevron Argent between a Cap and Needle to dexter, a Left Hand paumeè to Sinister, and a Huguenot Cross in base, all Argent, a Fleur-de-Lys Gules. Atop the Shield, and upon a Wreath of these Colours is set for a Crest, une Tourelle Carrée, Argent avec une Fleur-de-Lys, Gules. The Motto, Sinister Est Droit (Latin: Left Is Right) to be carried on an escroll beneath the Shield.

ID: 1000384 – Based on the translation of the name Callet, ‘The maker (sewer) of caps or hats worn under a Crown or coronet’ and incorporates a left hand as the armiger is left handed. The crest represents the family’s origion in Château-Thierrry, France. (Based on the city’s Arms.)

Assume Arms Notes: This started as a free registration with the Armiger’s emblazonment. He then decided to have Assume Arms emblazon it. 2021 Update: Armiger wanted to update these arms to add the Huguenot Cross, also known as the French Reformation Cross, and to deemphasize the militaristic side by removing the Helm and going with the English style of Crest resting on a Torse directly on the shield and also removed the Order of the Reindeer. Assume Arms Performed this update in August 2021.