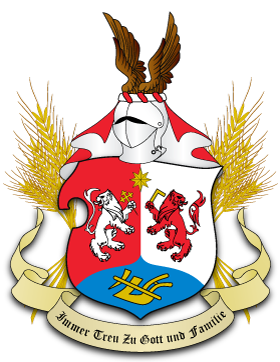 Blazon: Tierced Per Pairle reversed Gules, Argent, and Azure, in Dexter a Lion rampant regardant to Sinister of the Second holding aloft a Cross Crosslet fitchee couped Or, in sinister a Lion rampant regardant of the First holding aloft a Carpenters Square of the Fourth, in base a Plow of the Fourth fimbriated Sable and in Chief, a Mullet of 8 Or. Atop the Shield, a Steel Helm mantled Gules doubled Argent and on Wreath of the Colours is set for a crest a pair of Red-Tailed Hawk Wings addorsed and elevated Proper. Supporters on either side, a Garb Proper. The motto, Immer Treu Zu Gott und Familie (German: Ever Faithful to God and Family) to be carried in an Escroll below the Shield.

ID: 1000085 – The Lions and field tinctures that are present in the Armorial Bearings of Thomas Behel represent the Lions and tinctures present in the coat of arms of the Hessen and Palatinate city states in Germany where his ancestors, then named Bechtel, lived before departing for America. In the first, the lion is holding aloft a crosslet fitchee. The crosslet fitchee represent an unshakeable faith and represents the bearer’s devotion to the cause of Christ. It represents the bearer’s leadership through years of missionary work, ministry, and eldership in the church. In the second,the lion is holding aloft a carpenter’s square. The square represents the bearer’s trade as a builder but also represents a n upright and just life. In the third, there is a plow. This represents the bearer’s love of farming and the joy that is received by reaping the benefits of hard work. The traditional use of eagle wings that are often seen in Germanic Wappen was used to inspire the Red Tail Hawk wings that are present in the bearer’s crest. The hawk was chosen to represent the bearer’s birthplace and homestead on Hawkpride Mountain in Alabama. The Supporters for the arms are garbs of wheat. The garbs represent the wheat fields which are part of the bearer’s lands and home place. The motto, “Immer Treu Zu Gott und Familie” (Ever Faithful to God and Family) describes the character and devotion of the bearer to his maker and his family.