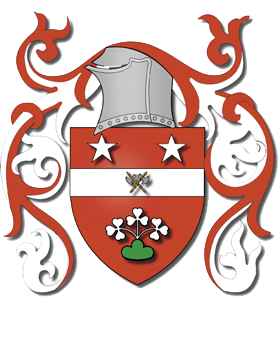 Blazon: Gules, on a Fess Argent between 2 Mullets and 3 Shamrocks coinjoined at the slips of the 2nd issuant from a Trimount couped Vert, 2 Battleaxes in saltire Proper. Atop the Shield, a Steel Helm mantled Gules doubled Argent. The Motto Ne Cede Malis (Latin: Yield Not To Misfortune) to be carried on an escroll beneath the Shield.

ID: 1000067 – The colours represent Switzerland, where the family is from. The Battleaxes represent military service and the Fess public service. The Mullets represent the Armiger’s symbolism of religion and a return to the Ballifs of 1644 and their emblem on a bridge stone over the Broye river. The Shamrocks symbolize the 3rd branching of Serge Louis Ballif as he had 3 sons.