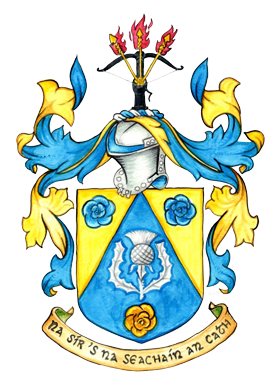 Blazon: Per chevron throughout Or and Azure a thistle Argent between three garden roses counterchanged. Crest: On a Wreath Argent and Azure a crossbow Sable loaded with three flaming arrows conjoined at the nock Or enflamed Gules. Mantling: Azure doubled Argent. The Motto Na Sirs Na Seachain An Cath (Scottish Gaelic: Neither Seek Nor Shun The Fight) to be carried on an escroll beneath the Shield.

ID: 1000262 – In the crest the crossbow is representative of interest in archery with three arrows to light the way. On the shield the thistle is representative of Scottish ancestry with the roses to represent love of nature. The gold and blue is water and light just as is the blue and white is in the wreath and mantling.