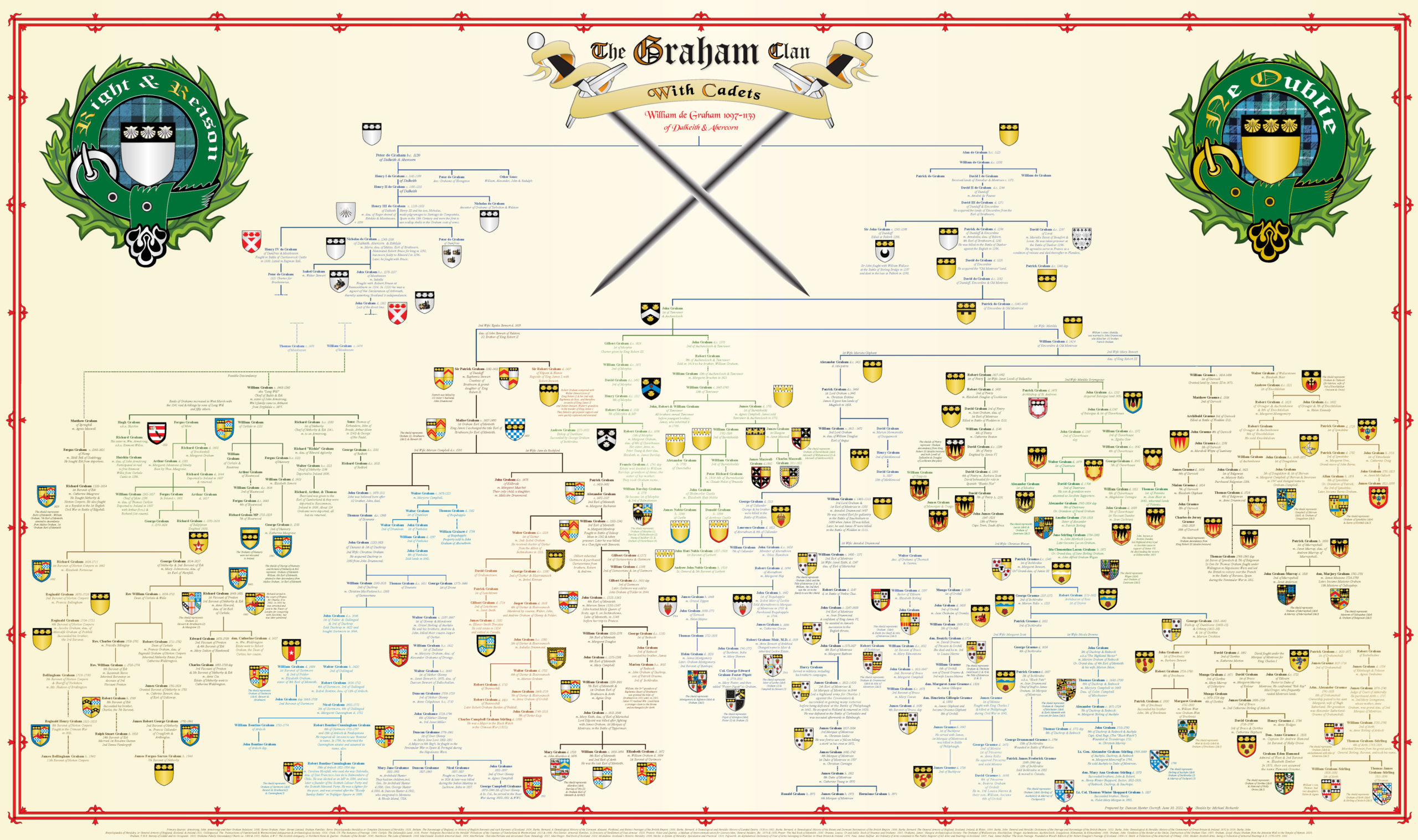 This is the largest project AssumeArms.com and Principal Heraldic Artist Michael Richards has ever undertaken. It is an historically accurate genealogy painstakingly researched by Duncan Cocroft using arms as identifiers.

The Graham Clan & Cadets genealogy chart is organized into eight major cadet groups that descend from William de Graham, who was born late 11th century. William had two sons: Peter, who was the oldest and represented the “Senior Line”; and Alan, who represented the start of the “Junior Line”, and is the ancestor of Montrose cadets and most of the Graham cadets depicted on the chart. The Senior Line ended with the death of John Graham in 1362. However, as seen on the chart, the Grahams of the border, represented by the family of William “Lang Will” Graham and Matthew Graham, may have been descended from the Senior Line.

David de Graham of Montrose (d.c. 1382) in the Junior Line is the ancestor of all the six other major cadet groups. He had two sons, Patrick and John. From Patrick (d.c. 1400) are descended William Graham (d 1424), father of Alexander Graham (d. 1421) and the Earls, Marquises, and Dukes of Montrose, along with the cadets of Meiklewood, Callander, Inchbrakie, Gorthie, Orchill, Braco, Poltoon, Airth, Strowan, Monzie, & Duchray. His younger son, John, is ancestor of the cadets of Morphie, Auchencloith & Tamrawer.

William Graham’s second son, and brother of Alexander, was Patrick Graham (d. 1413). He was the father of Malise Graham, the first Earl of Menteith. This line also includes cadets of Boquhapple, Duchray, Polder, Gartmore, Leitchtown, Gartur, and Rednock, to name just a few.

William Graham married a second time to the daughter of King Robert III and had four sons: Robert, from whom are descended the cadets of Fintry (incl. Claypots, Monorgan, & Craigo) and Balargus (incl. Claverhouse, Duntrune & Potento); William of Garvock (incl. Balgowan & Murrayshall), Walter of Wallacetown (incl. Knockdolian, Dougalston, & Lymekilns), and Patrick, who was the Archbishop of St. Andrews.

King James VI of Scotland became King of all Britain in 1603, and soon after cracked down on the inhabitants of the border of Scotland and England. Numerous Grahams, including descendants of William “Lang Will” Graham, were deported to Europe and Ireland. Other than the Grahams of Nunnary, the new cadet groups that later occupied lands near the border, and were descendants of Mathew Graham, were Esk, Norton Conyers, and Netherby.

Altogether, there are more than a hundred cadet families identified in the genealogy chart.