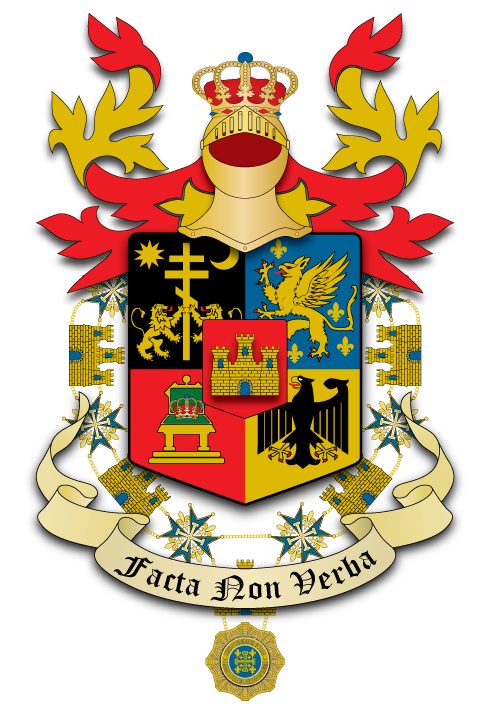 Blazon: Quarterly, 1, Sable, a Russian Cross Or supported on each side by a Lion Rampant of the Second langued Gules, in Chief Dexter a 10 Pointed Mullet of the Second, in Chief Sinister a 1/4 Phase Moon of the second facing Dexter; 2, Azure, a Griffin Or armed and langued Gules, the field scattered with 4 Fleur De Lis of the Second; 3, Gules, upon a Throne Or with Cushions Vert, a crown of the Second; 4, Or, an Eagle displayed Sable, armed and langued Gules; Over all an ineschutcheon Gules, a 3 Towered Castle Or with Windows and Gate Azure. Atop the Shield, a Helm Affronty Or mantled Gules doubled Or with a Royal Crown Or set for a Crest. The Knight Grand Collar of the Order Of Prince Daniel of Kholm encircling the Shield and the motto, Facta Non Verba (Deeds, Not Words) to be carried in an Escroll below the Shield.