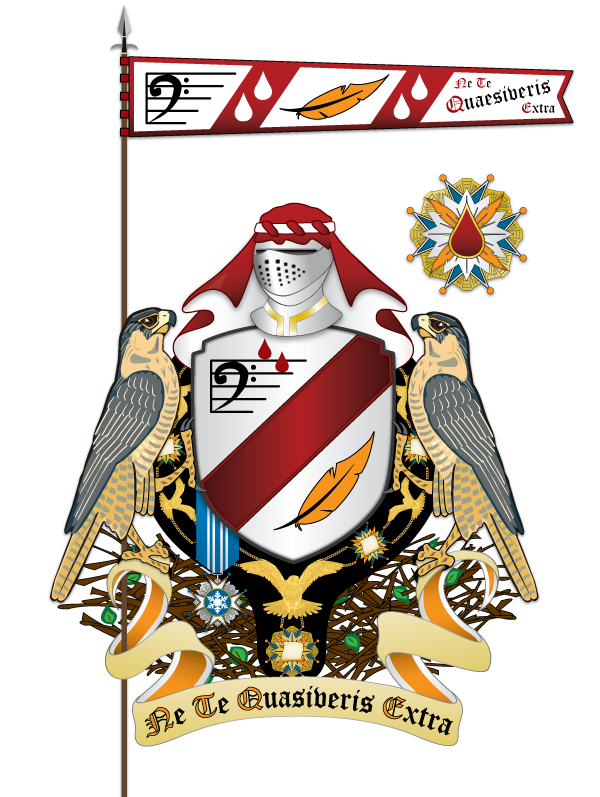 Blazon: Argent, a Bend sinister Sanguine between 2 Gouttes de Sangue on lines B and G of a Bass Clef Music Staff Sable and a Quill bendwise sinister Tawny fibriated Sable. The whole surrounded by The Knight Grand Collar of the Order of the Tawny Quill and the Knight Officer of the Order of the Snowflake suspended from the Escutcheon at the base of the Bend Sinister. Atop the Shield, a Crusader’s Helm affronte mantled Sanguine doubled Argent from a Wreath of the Colours. Supporters, Peregrine Falcons combatant Proper. The motto, Ne Te Quaesiveris Extra (Seek Not Outside Yourself) to be carried in an Escroll wrapped around a Peregrine’s Nest.

Ne Te Quaesiveris Extra
(Latin: Seek Not Outside Yourself)

ID: 1000002 – Designed in 2006 and mantling, torse and helm added January 2009. Mantling changed to more traditional in April 2009. Added Knight Grand Collar of the Order of the Tawny Quill and changed supporters to Peregrine Falcons on the 27th of February 2014 and made according changes to arms.